Posted by Bas & Sarie on July 6, 2018 in Camperlife, Roadtrips & Getaways |One Comment

When day turns into night nothing really happens here this time of year. The sky turns orange and violet and then simply back to a semi-blue. The moon is in the sky but no stars are to be seen and the sun continues to linger at the horizon like she can’t make up her mind whether she’s leaving or not. Here’s the story of how we celebrated the longest day of the year in central Sweden!

The drive up to lake Siljan is drenched in rain, like most days have been since we arrived in Scandinavia a little over a week ago. But as we make our way to Mora a watery sun peeks through the clouds and we have renewed hope of a sunny summer solstice celebration. 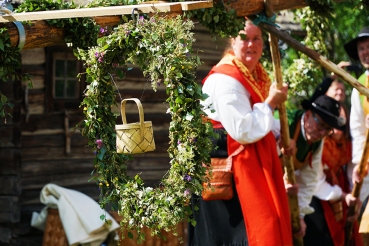 We’re here to take part in Sweden’s biggest national holiday. Midsommarfest welcomes the arrival of the sun after the long, cold, dark winter that is typical for the Nordic countries, by dancing around a freshly decorated and risen maypole.

Although Google tells me the maypole owes its name to the German tradition of raising a decorated pole on May 1st, the Swedes ensured me it has nothing to do with the month May at all. Instead, the Swedish ‘maja’ – meaning ‘to dress’ and referring to the dressing of the pole in leaves and flowers – got lost in translation which is why the pole is now referred to as maypole.

Either way, (it ‘may’ be one explanation or the other ;)), the pole is traditionally decorated on or right before midsummer’s day and the wrapped birch leaves and flower wreaths stay on all winter until the pole is taken down again in preparation of the next summer solstice celebration.
Being a Pagan holiday, Midsommarfest has it’s roots deep in nature, and the gathering of flowers and weaving of wreaths are believed to capture the magical powers of nature and ensure good health all year long. So, here’s to a year free of flu!

A sea of flowers 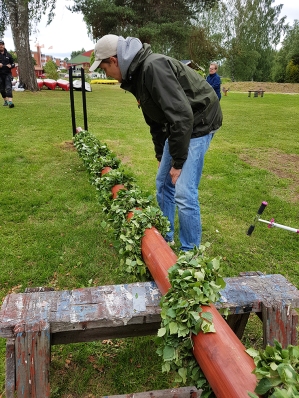 Wanting to soak it all up, we try to join in on the festivities early. As we arrive at the park, supposedly to gather to pick flowers in preparation for the next day’s celebration, we are left a little disappointed. No music, no banners, no people. Just an empty rainy park. Okay, fair to mention we are half an hour late, so we decide to bike around and see if we can find a group of festive people dancing around and picking flowers anywhere nearby. All we find are two women filling buckets of flowers out in a rainy field and a group of about 6 people decorating a maypole in solemn silence in what looks like someone’s backyard. A little confused we pick some pretty flowers to decorate Brutus. Now at least our home on wheels vibrates some midsummer-party-vibes.

Getting up early on midsummer’s day to help decorate the pole and weave some wreaths, we discover that the two soaked women in the field actually had been the ‘group’ of people we had been looking for. Ten big buckets of flowers are lined up and upon my question if we can do anything to help, we are kindly instructed to start binding small flower bouquets and add those to two big birch leaf wreaths. The turn up isn’t too great today either, maybe due to a grey sky and cold blowing wind, but the atmosphere is good and we are happy to take part in the honorable task of dressing the maypole. I try to convince Bas that flower crowns are a male thing too (which they are in Sweden!) but he’s definitely too manly to give in so I just weave my own.
After adding a long strand of birch wire to the pole in a fairly specific manner, we are excused but strongly urged to come back later to the official celebration where the pole will be risen.

To make it into a full day of summer solstice fun, we go out to eat at a traditional Midsommar buffet. Being on the road we try to budget our spending money but have decided to go out and eat something traditional at least once in every country we visit. What better to eat in Sweden then the traditional new potatoes, herring and fresh strawberries? (A lot it turns out, but we couldn’t possibly have known that literally everything would be drenched in dill, giving each and every bite the exact same taste).

Expectantly we start filling our plates with different kinds of fish, sausages and some kind of potato casserole. After a couple bites we notice the Swedish cuisine is, well… different. We all have had their little meatballs with jam at least once (and if you haven’t you should head to IKEA right now!) but it turns out they like to add that sweet taste to a lot of their dishes. The fish was absolutely fresh and delicious but covered in either a cajun marinade or lots and lots of dill. Not a bad meal at all, but just not really our cup of tea. The fresh strawberries for desert made up for it generously though! Not to speak of the delicious fire grilled herring we had the next day at a little country village celebration. 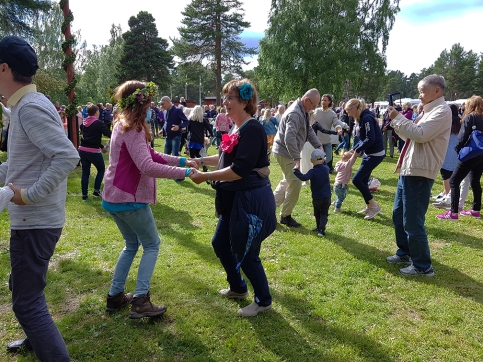 So here goes the rising of the maypole! Gathered with a crowd (where were all those people during prep time?) we circle around the pole. The mayor, or at least we guess, holds a speech and then the decorated pole is risen using smaller poles which are crossed underneath in order to push it up to full length.
After we patiently watch a group of pensioned folk dancers perform what feels like 50 versions of the same dance, it is our turn to join in on the fun. I hop around the pole, twirl in circles and kick my legs, trying to follow instructions in a language I don’t understand. A lot of my dance mates seem to be in the same boat however, so there’s a lot of laughing, bumping into each other and confusion all over the place. I love it!

We loved our experience of Midsommar in Mora but are still a little underwhelmed. Where were all the festivities, the music, the dancing other than hopping around a pole? Are the Swedes just this private? Did we pick the wrong place out of many to celebrate? We had fun, but the whole thing was over within an hour and didn’t have that local and festive feeling to it that we had been looking for.
It’s rematch time.

There and back again 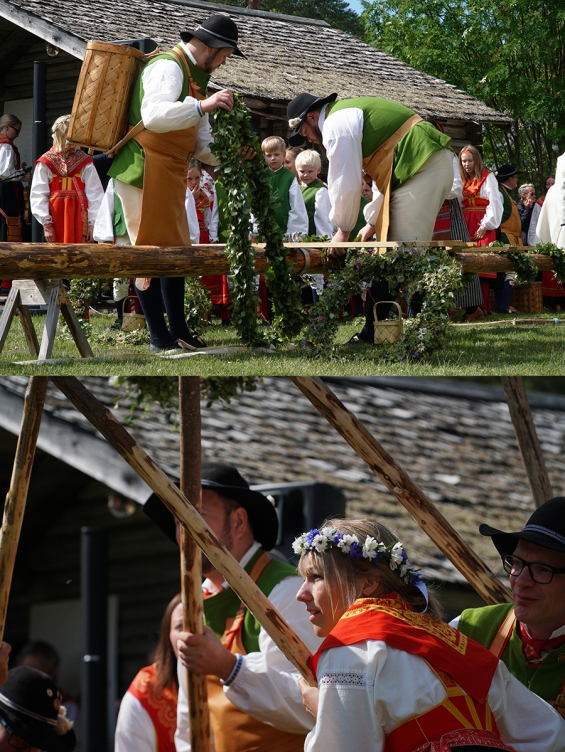 Our plans of visiting another, supposedly more traditional, celebration the next day are roughly put to a halt by an entrance fee we hadn’t anticipated. It really wouldn’t have been a problem had we not just spend the last of our cash money on crackers and tomato ketchup that morning. This is Sweden, so the nearest ATM is all the way back to Mora and a little sad we decide it isn’t worth the drive. Instead we head on north to visit a waterfall.
Only to return an hour later -with the money!- because we couldn’t bear to miss out on what honestly looked like the perfect Midsommarfest. We arrive at the “gammelgard” just in time for the rising of the pole. As we speculate why this one isn’t decorated, two traditionally dressed Swedes start wrapping it with birch wire. They make it seem effortless where we sort of struggled with ours the day before – these must be the pro’s! The band starts playing and more men and women clothed in Sweden’s traditional wear show up to rise the pole.

The sun is high in the sky as a group of little folk dancers enters the circle. This time around we don’t mind watching them perform an endless cycle of dances that resemble the ones we have seen yesterday but look just so much more fun! (Sorry oldies, we know you tried!). The kids group is followed by an adult dancing group who are equally enthusiast in their performance of traditional Swedish dances and enactments.
Accompanied by the singing of men, women and children hopping around the pole (kou ack ack ack, kou ack ack ack, here we go again!) we head to the fire to get our taste of herring and new potatoes. We’re just in time to share the last fish and are offered a light bear to make up for the fact they are out of bread. This is how we like our fish. Fresh, salty and well, just fishy?
Coming back here turns out to be the best decision we made this entire week!

You might start to believe in Midsommar magic had you been there; after weeks of grey skies and stormy weather the sun started to shine and it hasn’t stopped doing so since.
We’ve had our share of two very different summer solstice celebrations and although it might be clear which we liked best, I couldn’t tell you which experience was more memorable! If you want to see for yourselves how we survived all the Midsommar madness, head on over to our Youtube channel to watch our vlog on these two memorable days spent near the Siljan lake in Sweden (update: sorry, this vlog is currently offline).

May your summer be filled with flowers and your health stay strong all year! 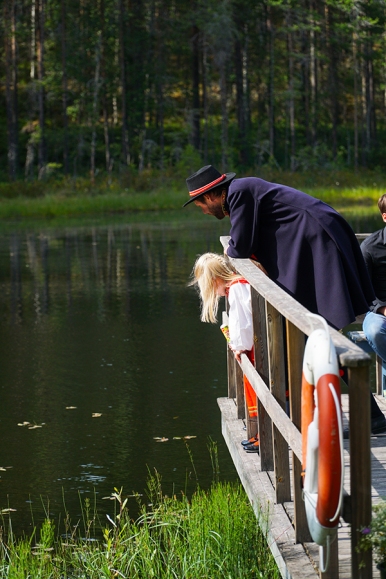 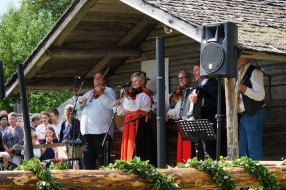 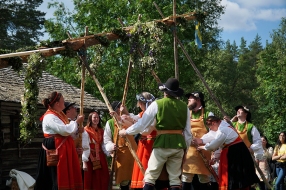 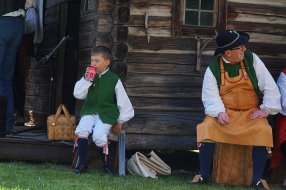